This article was republished as part of the Council on Business & Society’s Global Voice Magazine #23 here.

The United Nations is placing the current decade under the motto of restoring ecosystems. The topic has also been in focus at the 2021 World Climate Conference in Glasgow. The following blog post will explore the background and the strategy of the new UN Decade and what it means for the business world as an important trend and opportunity.

There are a lot of benefits connected to ecosystem restoration – not only ecologically, but socially and economically as well: It has a strong potential for reaching the global goals, and making regions and even refugees more resilient. It contributes to all 17 Sustainable Development Goals, like no hunger by providing nutritious food, reducing climate change, strengthening biodiversity and building peace. Furthermore, scientific evidence shows that, by 2030, the restoration of degraded ecosystems could generate an additional value of 9 trillion US-Dollars in ecosystem servicesand remove 13 to 26 gigatons of CO2e equivalent from the atmosphere. Consequently, the global benefits obtained from ecosystem regeneration exceed the cost of the initial investment tenfold.

The challenge: Degradation of land and marine ecosystems

Less than a quarter of the earth’s land surface is free of human impact. The destruction of ecosystems emerges through the expansion of cropland and grazing land, unsustainable agricultural and forestry practices, climate change, depletion of fish stocks, urban sprawl, infrastructure development, and extractive industries. These causes mainly arise from high consumption in industrialized economies and rising consumption in developing and emerging countries.

Degradation of land and marine ecosystems leads to mass extinction of species and therefore a severe decline in biodiversity, reduces resilience to climate change, increases natural disasters, causes problems for agriculture in growing food, and costs more than 10 % of annual global gross domestic product (about $6.3 trillion) due to loss of species and ecosystem functions. Furthermore, the destruction of ecosystems is a reason for mass migration. For instance, 46% of African land is degraded, threatening the livelihoods of almost two-thirds of African population. Because of the resulting drought and food shortage millions are expected to migrate from degraded parts of Africa in the next two decades.

The UN Decade on Ecosystem Restoration

With the UN Decade on Ecosystem Restoration, the United Nations has framed the current decade around the topic of ecosystem restoration. The UN Decade runs from 2021 to 2030, which is also the deadline for the Sustainable Development Goals (SDGs) and, additionally, the timeframe that scientists have identified as the last chance to prevent catastrophic climate change. The UN Decade on Ecosystem Restoration is therefore a call to protect and rebuild ecosystems around the world, for the benefit of both people and nature.

How does biodiversity contribute to climate change mitigation?

Restoring land ecosystems that increase carbon storage and minimize greenhouse gas emissions in forests, wetlands, grasslands, and croplands worldwide could provide more than one-third of the most cost-effective mitigation actions needed by 2030 to limit global warming to below 2°C. This would remove 13 to 26 gigatons of CO2 from the atmosphere by 2030. Healthy ecosystems are able to soak up about 50 % of the emitted greenhouse gases. However, their absorption capacities are declining because humans are overloading and destroying them.

The economic value of ecosystem restoration

Not only is there ecological value in renaturation, there is also great economic potential: By 2030, restoring degraded ecosystems can create an additional value of 9 trillion USD. The benefits achieved through ecosystem restoration exceed the cost of the initial investment by an average of ten times, while the cost of not acting is at least three times higher than the cost for ecosystem restoration.

How can we restore systemically?

Institutional and policy responses to the problem are often reactive, not holistic, and do not address the underlying causes of degradation. The goal, therefore, must be to create awareness in the broader society and policy space and to transform degraded areas into diverse, productive landscapes. After all, only with intact ecosystems can the decline in biodiversity be halted, climate change counteracted and people’s livelihoods improved.

In this new decade, it is particularly important to think of sustainability in a holistic way. Nature conservation and protection must no longer be thought of in purely ecological terms, but must be linked to social and economic benefits. After all, in addition to promoting biodiversity and improving living conditions, ecosystem restoration makes additional contributions to food security, energy supply, climate protection, urban heat reduction, community development and many other social, economic and environmental challenges of the 21st century.

Globally and nationally, we do not restore systemically. Nevertheless, we need common strategies to keep certain areas clear of destruction. Marshes, for example, are of outstanding importance from a climate protection perspective. Worldwide, they make for only three percent of land area, but absorb about 30 percent of emissions on land. Renaturation also includes reforestation programs. Within reforestation, the holistic approach would not be to create monocultures, but mixed forests instead.

The 4 Returns model: a framework for holistic restoration

Commonland, an organization deeply involved in ecosystem restoration, created the 4 Returns model, a holistic and practice-oriented framework that serves as a common guideline for global ecosystem restoration. Developed in tight collaboration with science, educational institutions, agriculture, and experts, “4 Returns” restores degraded ecosystems by focusing on four key returns over the course of a generation (20 years – the minimum period required to restore an ecosystem’s ecological foundations):

Under the 4 Returns model, committed people invest in restoring and maintaining ecosystems and get back reduced carbon emissions, healthy soils, clean water, increased biodiversity, and economic benefits through improved possibilities for forestry, hunting, and tourism.

As in many areas of sustainable development action, many innovative solutions already exist in the field of ecosystem restoration and are being implemented by pioneers around the world.

The Ecosystem Restoration Camps see themselves as a global movement of people who work together to repair or heal destroyed ecosystems. There are currently 43 such camps around the world, with nearly 15,000 international helpers involved to date. Projects range from the application of agroforestry practices in Europe to the re-vegetation of the desert in Egypt. The goal of Ecosystem Restoration Camps is to have one million people involved in restoring degraded ecosystems in 100 camps by 2030.

Even with the issue of refugees, which one might not initially associate with ecosystem restoration, it can mean multiple benefits for residents, host countries, and local biodiversity. Following the consequences of climate change, more and more people will likely be affected and will be confronted with forced displacement as a result. Finding shelter in refugee camps will be their only option. However, their stay is often longer than anticipated and so they find themselves stuck in a permanent form of temporariness in often harsh environments. But what happens if we combine the efforts of ecosystem restoration with humanitarian aid and development, empowering refugees with the tools and the knowledge to build a better life? What if refugee camps were transformed into green oases through renaturation?

To foster collaboration between different local refugee projects and other stakeholders in order to promote the transformation of refugee camps into regenerative camps, the author started the Generation Restoration initiative. Ecosystem Restoration not only improves food security of refugee camps, self-sufficiency and the skills of refugees and thus their job opportunities through the great learning and training effect. It also strengthens their hope of being able to actively shape their own future – back in their own country or in a destination country – instead of falling into new spirals of dependency. This self-empowerment is one of the most important formative emotions that Ecosystem Restoration can trigger – not just for refugees.

The Miyawaki Method: A sustainable approach to forestry

Another innovative initiative is SUGi, where anyone can contribute to the restoration of forests on land and aquatic forests by making a donation of as little as 5 Dollars. SUGi Forest Makers and Ocean Gardeners use these funds to restore biodiversity and regenerate ecosystems worldwide.

Many organizations plant only non-native tree species in monocultures in remote locations. These projects have minimal positive impact and are often not transparent about their growth and long-term effects on the environment. Contrary, SUGi’s global network of forest farmers creates dense and biodiverse forests of native species using the Japanese Miyawaki Method: these forests are 100% natural, 30 times denser and 100 times more biodiverse than conventional woodlands. They also grow much faster, binding a lot of CO2 and cleaning the air from harmful pollutants – which is important, as 4.2 million people worldwide die from air pollution every year. Especially in cities, the Miyawaki Method is ideal because it requires little space and counteracts the severe air pollution, which is especially noticeable in urban areas.

The organization Justdiggit is specifically working to regreen degraded land in Africa to counteract global warming. With local communities and partners, they collect rainwater, plant trees and create grass seedbeds, for example. Justdiggit does one thing particularly well: They are all about a strong communications approach to raise awareness of nature-based solutions around the world, closely cooperating with partners like Google, the IKEA Foundation, and National Geographic, as well as well-known advertising ambassadors and relying on striking advertising campaigns.

What actions do businesses need to take?

Achieving the goals of the new UN Decade will require more than just policymakers, NGOs and committed individuals. Additionally, it needs companies to pursue the goals of the Decade in their sustainability strategies. The political focus on restoring ecosystems means a great responsibility for conventional businesses, but also offers great opportunities.

One example of a company’s successful involvement in ecosystem restoration is the German enterprise Reckhaus. Transforming Executive Director Dr. Hans-Dietrich Reckhaus launched the Insect Respect initiative, transforming his company’s business model from a manufacturer of chemical biocides to a provider of ecological services. Coming from an over 60 years tradition of biocide production, Reckhaus is now focusing on a new way to make money: By unsealing and greening surfaces, the company is creating insect-friendly habitats on roofs and corporate areas.

Seeing changes of thinking even in such a conventional industry, transformation becomes possible in every sector. The global task of ecosystem restoration will be a multi-billion project. Companies and politicians will have to invest a lot of money in the restoration of ecosystems. Those already working on issues such as biodiversity, nature conservation or reforestation will have the chance to position themselves as competent cooperation partners and to show what they have researched and achieved.

A whole generation is keen to build their future in a positive way. Pioneers are gathering good ideas, encouraging examples and organizing exchanges of experience in the framework of the new UN Decade on Ecosystem Restoration. The momentum is here, the motivation is here, and the people with the right knowledge and experience are here. The time to take action is now: Participate in the UN Decade and become a part of the Generation Restoration! 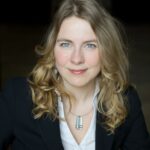 Sustainable Matchmaker and professional moderator. Strives to support regenerative projects in spreading their ideas, growing, scaling and multiplying. Together with a growing team, she is dedicated to bring her vision into a reality: Transforming refugee camps into places of regeneration and hope through ecosystem restoration.

This author does not have any more posts.