Climate change, food security and biodiversity are some of our times largest and most pressing issues, and the three elements are very closely related. So, a solution in one of these areas can affect the two others. We take a closer look at Greenland’s Glacial Rock Flour which could offer a solution to regenerative agriculture.

Climate change and agriculture are interrelated processes. The role of the agriculture sector in greenhouse gas (GHG) emissions is well known but not well understood. More than one-quarter of the world’s GHG emissions come from agriculture, forestry, and land-use change. And unless actively addressed, these emissions are likely to increase as our planet’s population and the need for food continue to increase. Conversely, climate change can significantly impact agriculture as well owing to drought, flooding, heatwaves, and pests, for example. Climate change can also impact soil fertility, food security and biodiversity, and the availability of irrigation water and agricultural land.

“If you look at it from a biodiversity perspective, it means that you could produce more food in the same area,” says Prof. Minik Rosing, Professor in Geology, University of Copenhagen. “And in some cases I believe we can increase the forest areas”.

Professor Minik Rosing, Professor in Geology, University of Copenhagen, and his team, have established that the nutrient-rich mud boosts agricultural output when applied to farmland and absorbs carbon dioxide from the air in the process. The Copenhagen team have worked with teams in Sao Paulo, Brazil and the University of Ghana, and have managed to increase maize yields by 30% using glacial rock flour to offset the impact of rain and heat on poor tropical soils.

The nano size and mineralogy of the silt’s particles is what allows plants more access to nutrients including potassium, magnesium and silicon compared to normal soil particles. Rosing and his team have documented that the silt works, and in the mentioned research in Ghana, they have tested it over five growth seasons

Therefore his research now focuses on

The Novo Nordisk Foundation has supported this part of the research, and Prof. Rosing welcomes other parties to support other aspects of the research.

The scientists are also developing a method to document the carbon emission uptake effect, so more precise life cycle analysis can be concluded.

Tests have indicated that one tonne of glacial rock flour can absorb between 250 and 300 kilograms of CO2 when applied to fields, potentially allowing farmers to sell that as carbon credits.

The key in this process is the tiny size of the silt’s particles as they help speed up a natural process whereby rocks absorb CO2. When the silt dissolves in rainwater and releases its nutrients, it undergoes a chemical reaction that locks in carbon dioxide from the atmosphere. The solution is then washed out with drainage water and eventually deposited on the seabed as carbonate minerals.

As for the documentation of the glacial rock flour being carbon neutral the expectation is that the team have a few years of research in front of them to be able to document the carbon emission accounting method.

“Success at scale could improve food security and economic imbalances partly caused by an uneven distribution of good quality farmland across the world” says Prof. Rosing.

Geological surveys show that the best farmland, which stretches across parts of North America and Europe, mark the margins of the ice sheets during the last ice age. As is happening in Greenland today, the thick layer of ice grounds the rocks and revitalises the soil.

“In Northern Europe, we think the reason we’re better off than the rest of the world is that we are so much smarter than everyone else. In fact, we just have better soil under our rubber boots,” Prof. Rosing said.

The volume of one billion ton of new deposition of silt each year is made as the in-land ice with its thickness of 3,000 metres gives an enormous pressure underneath that reaches the underlay, and extremely fine particles from the underlay are washed out with the meltwater. Due to the low temperatures and the rapid deposition, the silt in the large deposits is sealed and therefore not active in the Arctic environment.

Therefore, in Greenland the ecosystem will not experience a substantial negative impact, hence by industrialising the glacier rock flour, companies would not tap into a source that is important to the greenlandic ecosystem.

In the sub-tropical and tropicals the silt becomes active, and the scientists have measured that it contains no ecologically problematic organisms or heavy metal concentrations.

“The documentation also indicates a low environmental impact here, but there will of course always be an impact, as we are aiming to change a current situation” says Prof. Rosing

Scaling the use of the slit from a pilot phase to an actual production will need partners who will take on the product development,  and find the best solutions for packaging and transporting the silt.

“We need partners that can scale and commercialise the production” says Prof. Rosing.

Greenland’s Ministry of Mineral Resources is very well geared to govern the exploitation of this resource. The hope for all involved parties is to achieve more equality for farmers and economic prosperity in the South. For Greenland the hope is that by exporting the silt, the country can strengthen its position as a relevant partner for the rest of the world, and project soft power for the bridge building between the North and the South.

The idea of applying finely-grained rock to farmland is not new and several studies have shown that by-products from mines or quarries can improve soil quality. And the method has gained interest due to the added benefit of absorbing CO2.

Similarly, a study led by David Beerling, professor at the University of Sheffield, found that spreading crushed basalt on fields not only helps crops grow, but also removes CO2 from the atmosphere, and boost climate-friendly farming. 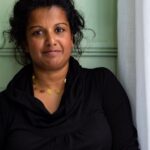 Charlotte is a member of Ksapa's Community of Experts. She's an experienced Strategic Impact Advisor with a demonstrated history of working in the renewable industry and an international contact base spanning industry, private capital, central & local government and academia. With an expertise in business development, she's a strong entrepreneurship professional who graduated from The London School of Economics and Political Science (LSE).

This author does not have any more posts.